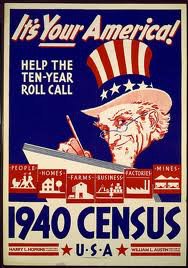 On April 2, 2012, users will be able to search, browse, and download the 1940 Census schedules from their own computers or from public computers in libraries, archives, schools etc. through the new 1940 Census web site, free of charge.

The National Archives and Records Administration (NARA) has digitized the entire census, creating more than 3.8 million digital images of census schedules, maps, and enumeration district descriptions. NARA selected Inflection, parent company to family history web site Archives.com, to design and host a free web site for the April 2, 2012, at 9 AM (EST) launch of the 1940 U.S. Census. This is the first time that the National Archives has released a U.S. Census online.

NARA Resources That Can Help You Prepare, and Learn More About the 1940 Census

Until a name index is created for the 1940 census the only way to use the census is by Enumeration Districts (ED).  An enumeration district is defined by the National Archives and Records Administration (NARA) as a "basic geographic area of a size that could be covered by a single census taker (enumerator) within one census period."

To assist researchers with the 1940 Census, Steve Morse has prepared a Tutorial Quiz, which suggests a number of search strategies and second opinions for finding ED numbers. The quiz takes you through a series of questions to determine your particular situation and then suggests your best strategy for using the various tools.

Three genealogy organizations, Archives.com, FamilySearch International, and findmypast.com, announced December 16, 2011 that they are jointly establishing the 1940 US Census Community Project. The collaborative project will utilize the collective resources, know-how, and marketing reach of Archives.com, FamilySearch, and findmypast.com to recruit and coordinate online volunteers to quickly create a searchable, quality name index to the 1940 US Census.

The completion of the 1940 index will allow anyone to search the 1940 census by name for free online. Learn more about the project and volunteer at www.the1940census.com. The same information is available at https://www.familysearch.org/1940census with the addition of "Research Assistance" -- "resources for those who want to learn how to effectively use census records in their research. Discover detailed articles and online courses to help you with your census research".